Who Wouldn't Want One?

so i guess women in germany are getting some support . . . in the fashion of bulletproof bras. sweeet! 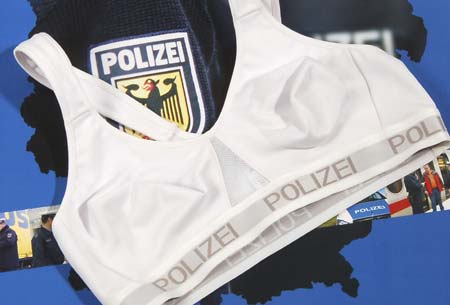 BERLIN (Reuters) – Thousands of German policewomen will receive what media have labeled “bullet-proof bras.”
Made of white cotton and featuring the word “Polizei” (Police) along the seam, the bras are meant to better protect police women who wear bullet-proof vests.
“There was a slight safety risk for women wearing normal bras with metal parts underneath a bullet-proof vest,” a police spokesman in the northern city of Hanover said.
“If the vest is hit by a projectile, this can have an impact on the metal bit in the bra underneath and cause injuries.”

Some 3,000 police women working for Germany’s federal police will be equipped with the new bras which feature no metal parts and look like sports bras, the spokesman said.