Sometimes I like to challenge myself with a creative project outside of advertising. Something, I can do that will still make me solve problems, but use some different brain muscles (nerdy, I know). The challenge this weekend was the Christmas Leftover Challenge. It has nothing to do with food but with those ugly leftover Christmas decorations in the store that they can never seem to sell.

The weekend after Christmas, take $100 and decorate an entire 6.5 foot Christmas tree.


This took some serious creativity. Have you ever been in a craft store after Christmas? It's scary, there are women everywhere digging through bins and trying to find anything that remotely matches. I ended up going to Joann and Michael's for the challenge. I would normally go to Hobby Lobby, but I had been there the week before and there weren't any holiday things left (they already had spring stuff out).

Starting at Joann, I started to wonder what I had gotten myself into. Of what they had left most of it was neon purple glittery. All Christmas was 80% off, so I was going to make something happen.

There were some gold and brown things left, so I decided to try and stick to a classy gold/cream/brown color scheme.

After digging through 15 boxes of picks I found 5 of the gold glitter poinsettias and about 15 gold glitter snowflakes. 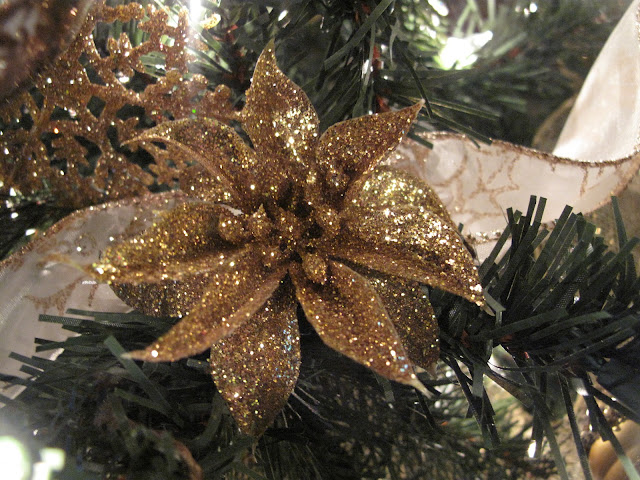 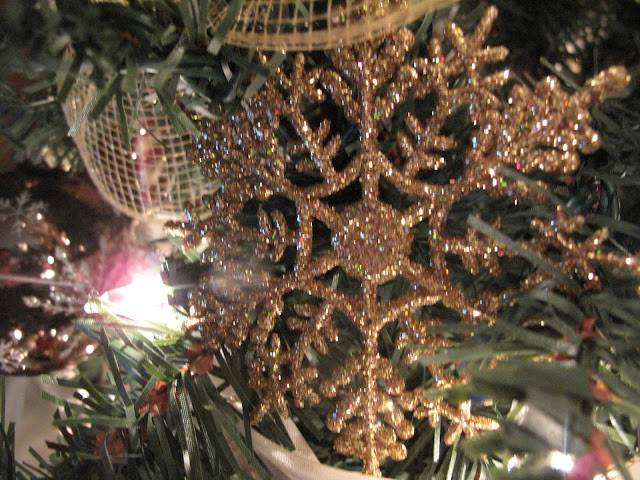 Okay, I'm now covered in glitter. Check. Onto the other ornaments. I found 5 of these great brown snowflake bulbs mixed in with the purple ones that look just like it. 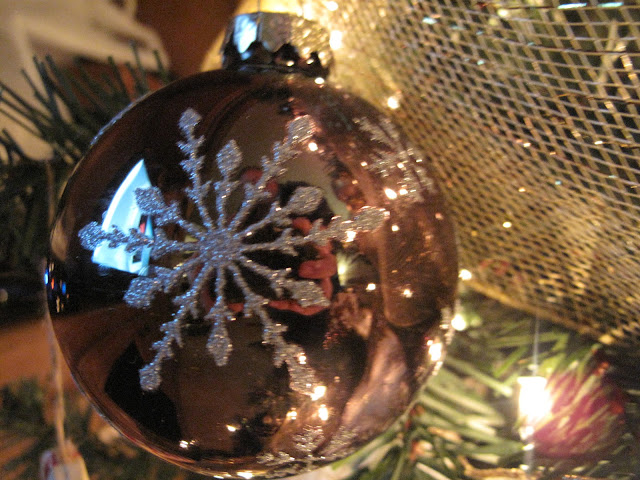 There were only two of these bells but I really liked the small pop of red they had on them. So in the basket they went. They can be nice surprise finds when someone gets close to the tree. 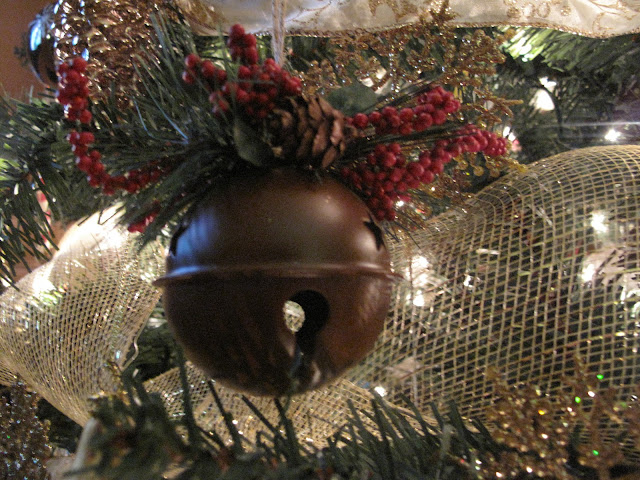 These glass pine cones fit the color scheme perfectly. There were only two of the shiny gold pine cones, but there were five of the brown pine cones. My buddy Cory said the brown ones look like turds with glitter on them. Thanks. 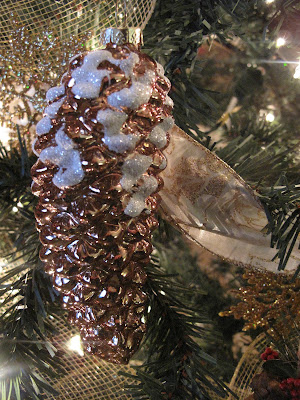 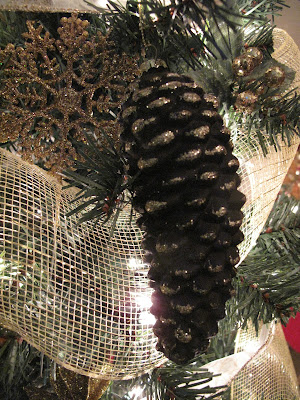 Four wooden candy canes came in one package. It was the last one. There were six of the gold ornament. They are plastic but still show nicely on the tree. 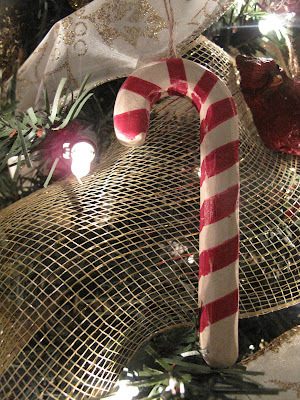 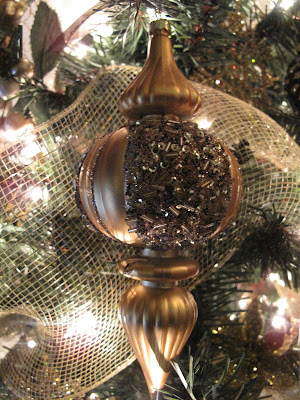 One store down, on to Michael's.

Michael's was interesting they had more leftovers than Joann. Though it was a huge cluster fuck. There were two aisles of Christmas stuff, one end cap of ornaments and about 15 women trying to maneuver around it all. Let's just say my claustrophobic tendencies were starting to show. I ended up finding some ornaments I really liked.

The first find were these Cardinals. Yes, I am a Cardinals football fan, but I also got them because my Grandmother loved them. This was our third Christmas without her, so it was a nice little reminder of her. I lucked out, there were six of these left. 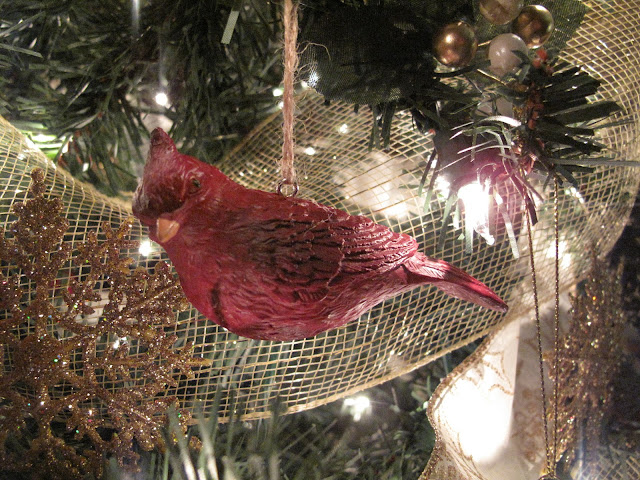 I wasn't sure about these Santa's, I thought they might come off as too cartoonish. In the end I took the two left of Santa in the sleigh with no reindeer and the four of Santa with a reindeer. 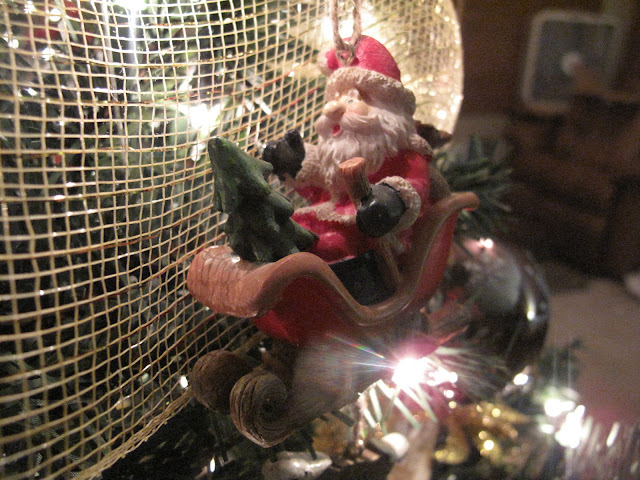 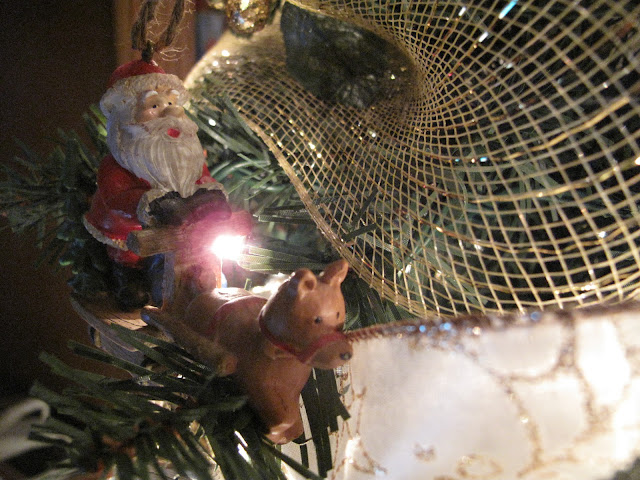 Next up are the orange bulbs. Four of these babies in a pack are $10 bucks normally. Not for me I picked them up for $2. I had to dig through a few shelves of hot pink and neon colored ornaments to find a few boxes of these. 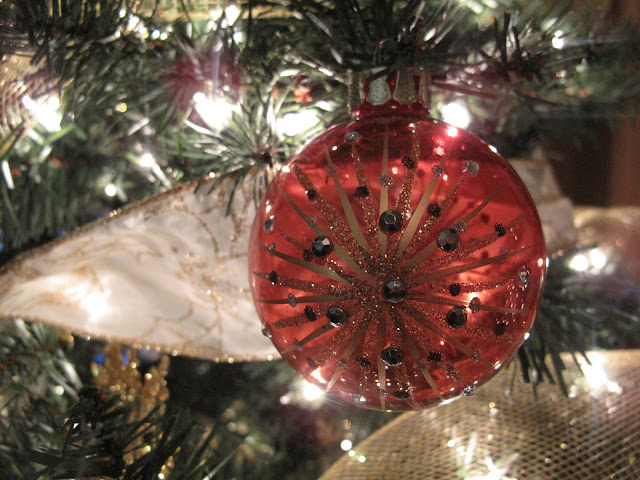 The other thing that was added to my tree was a spool of gold mesh and a few yards of cream colored ribbon with gold glittered holly. The tree was pre-lit so I didn't have to worry about lights.

Below is the finished tree.