Is it just me or do the youngest people in the agency always get charged with the holiday gift?

Expect nothing different at High Wide & Handsome. I was in charge of this year's holiday gift and I take it as kind of an honor, since it was the first one ever sent. Though as always my perfectionism got the best of me as you will see . . .

First the holiday gift just started out being a holiday scarf. Simply embroidered and then mailed out the clients . . . and over the two months I had to work on it, it slowly escalated into boxes and labels and crinkle paper. Though I won't take all the blame for all the work. My boss . . . totally as A.D.D. about details as I am.

First. The scarf, we got baller extremely soft cashmere scarves from Scotland. They then had the HWH logo on one end and the double diamond on the other. I have to say, the double diamond is my favorite representation of the HWH brand. 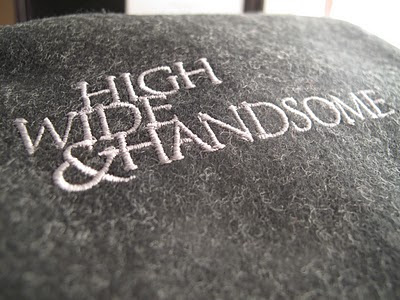 Second. The boxes the scarves were to be shipped in came and the inside was the brown craft and not the same black color of the outside of the box. Probbblleemm. Our color scheme was lavender, silver  and black. So to fix problem number one, we took the silver tissue paper and spray mounted (yes we rocked a bottle of Super 77) them into the boxes. Then I trimmed and folded each box. Big props to Jarrett who helped me with the spray mounting. 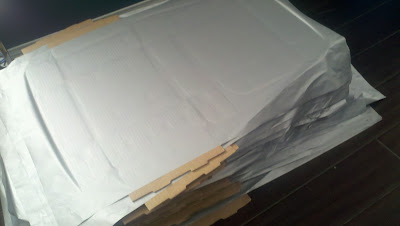 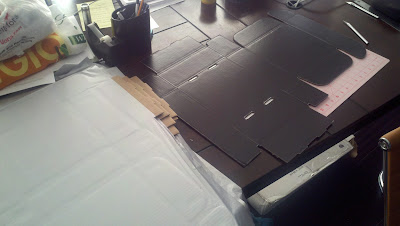 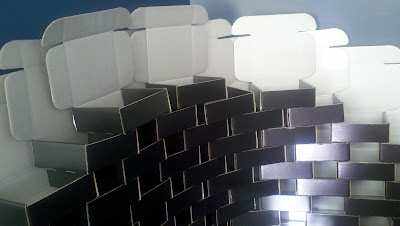 Next I folded each scarf so that when it was unwrapped you saw the HWH logo. Followed by wrapping it in lavender tissue paper and tying a lavender ribbon around it and securing it with a bow. Props to Matt who helped me with this. 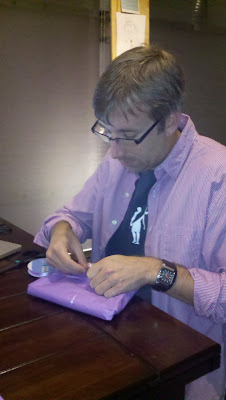 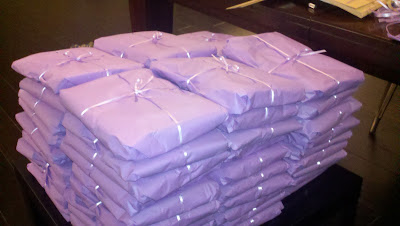 We couldn't just put the packages in the silver lined box, we needed something to make it feel festive and fun. Crinkle paper! Wonderful idea, though no one produces silver crinkle paper . . . what'd we do? We made our own. Matt also helped me with this. We fan folded all of the tissue paper and then cut strips to make the filling. It worked great. 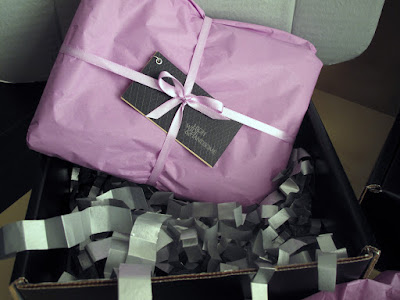 Third. We wanted some kind of tag on the scarves, so Mike came up with the idea of creating a booklet that showed different ways to wear the scarf. I did some simple illustrations got them all printed and cut. Matt cut the black covers which I think took longer than cutting all the three middle pages and back page combined. They did a glossy black crop mark on a matte black paper . . . it was ridiculous to see. The cover page was grommeted and the pages were held together with a 14G aluminum ring. They definitely classed up the gift. 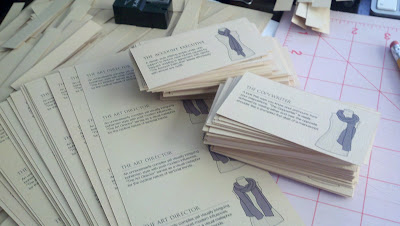 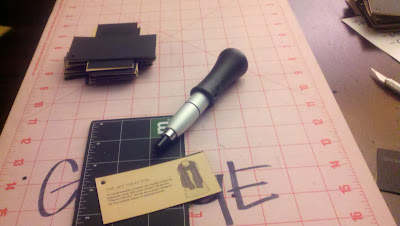 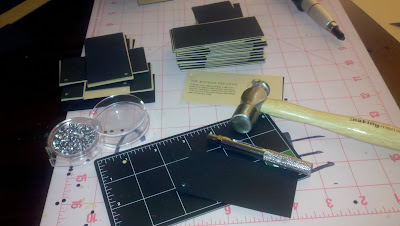 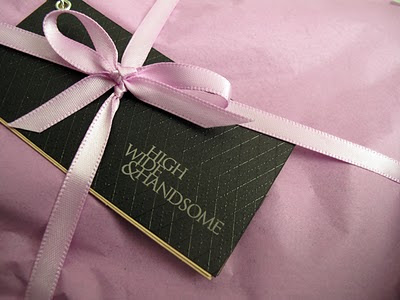 Four. So once the boxes has been lined and stuffed with the crinkle paper and neatly wrapped scarf, they all had to be closed and labeled. We used 8.5x11 Avery labels, and printed two labels on each. The tag sat on top of the box and wrapped around the side and on to the bottom to securely seal the box. 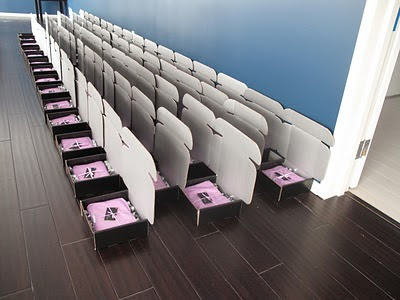 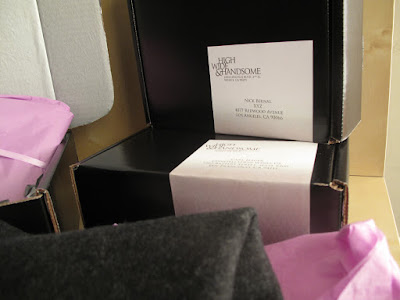 While we are waiting there is no shortage of entertainment. First there are two men who look and smell homeless. They are packaging what looks to be HUNDREDS of boxes of this Acne medicine called Acne Statin, their website is horrid and now understand why homeless people are doing their fulfillment.

While they are sitting on the floor in the middle of the small post office, there is a lady that keeps asking people if she can send stuff in a box that says it's for VHS and DVDs . . . so the homeless man starts to tell her the benefits of sending things in flat rate boxes. So over the course of 5 minutes her and the homeless man wonder around the store looking for small flat rate boxes, only to come to the conclusion that they are out.

There is a man in a 1980's Southwest Fleece looking jacket with a shopping cart full of 10 manilla envelopes. Clearly he needed a shopping cart for such an exuberant number of packages (that was sarcasm)

Then there was a lady in front of us who was eavesdropping on our conversation and wanted to know where we worked because it "sounded like so much fun" imagine large eyes and jazz hands.

So finally the line begins to move. Magnus decides to ask the lady if we can do what we had planned or if we needed to bring in all 75 boxes. The short asian lady tells him, "boxes inside. all box, inside." So, Magnus looks at me and he starts to head outside to start bringing in all of the boxes.

As he is bringing in the boxes, the line begins to fill up again and people are looking at all the boxes he is bringing in and saying how excited they are and thank God he was coming in after them . . . and then he came and stood back in line with us. They. were. not. happy.

Finally our turn! Just our luck the man on the opposite side of where we stacked the boxes becomes available for us. So we had to move all the boxes from one side of the post office to the other. James was our teller and looked like a black Santa. Though, he wasn't jolly. at .all. 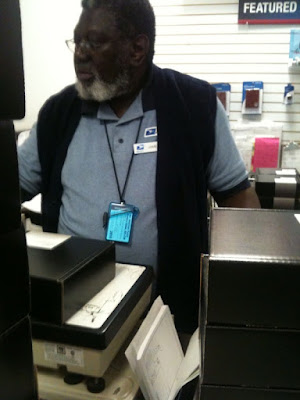 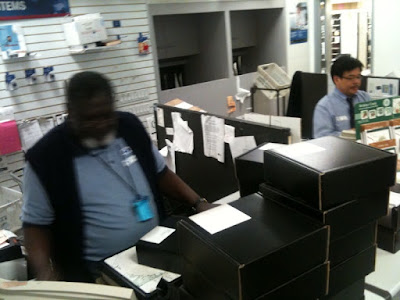 Just about now the homeless men are now behind us as we are at the counter. One of them is talking about myself and Magnus, saying how we didn't have postage on our boxes and that the other homeless man shouldn't have let us in front of them (which he didn't we were in line waaay before they finished their boxes and were 5 people BEHIND us.) The second homeless man just kept saying "I didn't see her. I didn't see her." No shit sherlock, because we were in front of you. And. You come to the post office to. get. postage.

After all of that came my favorite part of the ENTIRE 2.5 hours we were at the post office. There were 2 separate women and a couple ask us what was in the boxes and that the packaging "was beautiful." After telling them we were an advertising agency they were like "oh, no wonder." They didn't know everything was done by hand with no more than myself and one other working on something at a time. It completely made my night. I really hope that the clients like them just as much. 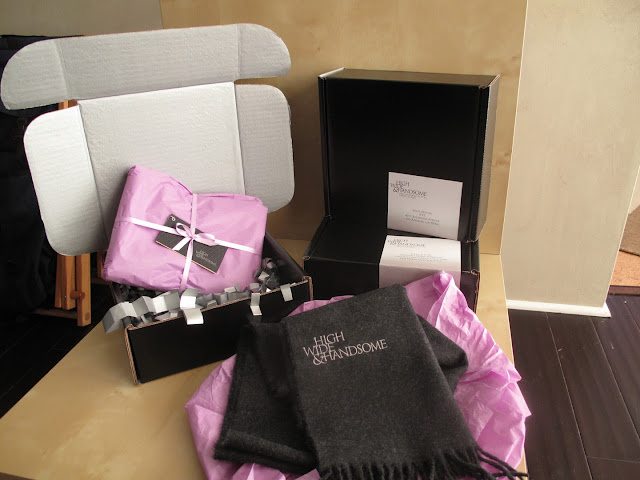