If you've ever gone to Van Chevrolet to get your car serviced and taken the shuttle home chances are you've encountered this shuttle driver. He's a 79 year old man with white hair, a bunch of perfectly placed wrinkles and walks slightly hunched over.

If you don't pay attention you could easily just pass him over for another old person in the Valley. Though take one ride with him in the car and you will experience a world we no longer know.

Today I got to hear the story about how he became a pilot. Before he made the decision to become a pilot though, he was doing jobs to get by. He was a typewriter repair man, a bartender and something else that I can't remember. Anyway, as he was looking around at the people in the bar one night he was starting to realize that he had a lot more potential and wasn't ready to settle for what he was doing like everyone else in the bar had.

As he began to contemplate his future, he saw a girl with a mini skirt on (this is where I thought the story was going to take a turn for the worse) and it flashed him back to a flight he was on a few weeks earlier. He started thinking about what it would be like to be a pilot, the uniform, the pretty stewardesses and the good pay.

He began to train and get his credentials. Within 138 days he had them all complete. He said he was amazed at how all the obstacles just fell away and it felt like it was God that cleared the way for him to be a pilot. Things that shouldn't have happened were happening in a good sense.

See when he was younger some idiot fired a gun next to his head and pretty much destroyed his hearing out of one of his ears. To be a pilot, you need to be able to hear perfectly. He was understandably nervous when he went into do his hearing test for the Mighty Tigers.

He went into this tiny sound proof room with a tiny window. He sat down and put the headphones over his ears and waited patiently for the nurse outside the room to start twisting and turning the knobs to send faint sounds into his headphones.

She instructed him to raise his hand every time he heard a sound no matter how faint. To his luck the nurse started with his good ear and it passed at 100%. As he finished the first test, he felt this giant sneeze come on. AAAHHHH-CHOOOO, the sneeze was so big and loud his head went down between his knees.

After he sneezed, the nurse continued with his bad ear. Amazingly, it passed with 100%. He got the job with the Tigers. It was the beginning of a 30 year career. Every time he went into the doctor for his hearing check-up he passed easily because they just yelled at him from across the room.

As I'm listening to this, I'm thinking did the sneeze pop something? Did some animal take residence in his head for all those years? What made him be able to hear so miraculously? So I asked.

Nope, no Jesus miracle . . . when he sneezed and put his head between his legs . . . he switched the headphones so the nurse tested his good ear twice. At this point in the story I start laughing so hard, I had tears. I don't know what it is about hearing a story from an old person, you never think they were ornery. . . but most of them were more ornery than we could ever imagine.

He always just turned up volume 100% and never missed a call or conversation. He flew some of the most amazing planes of the time. Through his travels he met his, what he says, amazing wife and had more adventures that anyone ought to be allowed in one lifetime.

I was like holy fuck you need to share these stories of yours. Come to find out he has written a book. It's called The Mighty Tiger: Adventures Of An Unlikely Pilot. I've attached a link below so you can check it out on Amazon if you are interested on hearing more of this man's amazing stories. 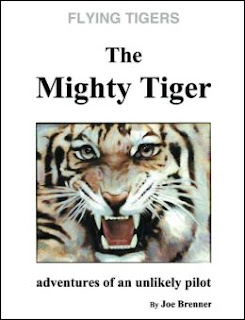